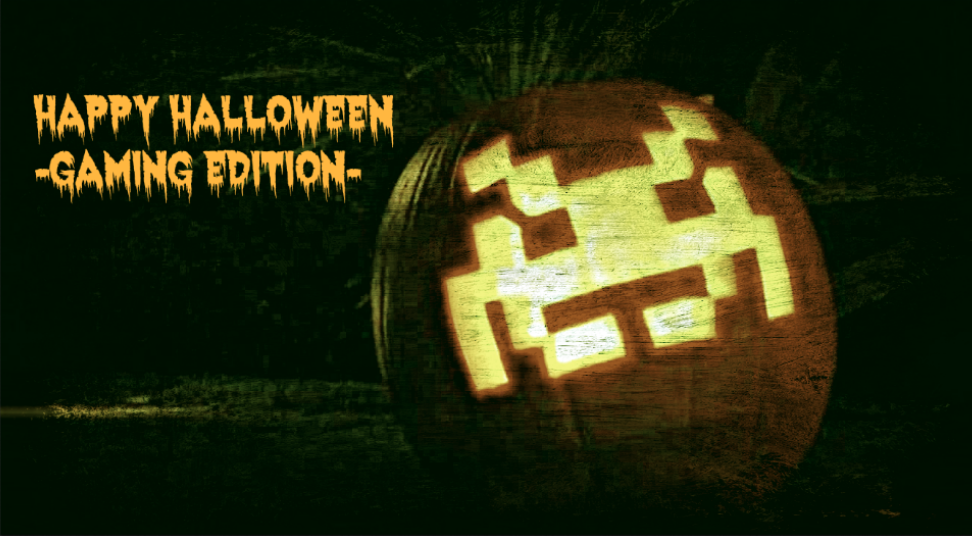 The days are getting shorter and colder. The leaves are changing colour and saying goodbye to the branches they were attached to. And yes, Starbucks is selling their famous Pumpkin Spice Latte. I for one love this time of the year. Not just because of the changes in scenery and the seasonal Starbucks coffee specials. No. I love this time of the year especially because of Halloween. A holiday filled with haunted houses, costume parties and a whole lot of candy. Who doesn’t love these things? Seriously!?

Of course some people are more prepared for the festivities than others. Not quite feeling the Halloween vibe yet yourself?  We have your back. Because we have some pretty awesome ideas about how to get your Halloween groove on. And obviously Girl Gamer Galaxy always comes up with ideas that are at least somewhat gaming-related. So sit back, relax and get ready to be inspired…

Nothing says Halloween more than a creepy (horror) game. Game suppliers know that. So almost every online gaming store has some kind of special Halloween sale. For example: PlayStation started their Halloween promotion sale on the 18th of October and this will last till November 1st.  Enough time to buy that creepy game you always wanted for your PS4, PS3 or PS Vita. Steam is probably not going to disappoint us either. According to an (unofficial) Steam Sale countdown the next Steam Sale starts on October 30th. So expect some awesome discounts on anything horror-y.

Even Nintendo is ready for Halloween. The Nintendo eShop has some creepy games on sale until the 3rd of November, like Resident Evil and Project Zero. Awesome, right? Last year Microsoft introduced ‘Shocktober’ and offered us big discounts for a variety of horror games. And this year.. uhm this year.. uhm nothing? At least we couldn’t find anything remotely Halloween related. Sorry Xbox owners… Seems like you will have to pay full price for your ‘creepy games’… Unless someone reminds them that Halloween is coming. Now let’s move on..

Did you know that there are a lot of cheap gaming related costumes available on sites like eBay and Amazon? Think of Super Mario, Luigi, Princess Peach, Yoshi, Link, Zelda, Charizard, Pikachu, Snorlex, Marill, Ash Ketchum, Ryu (Street Fighter), Akuma (Street fighter), Eddy Gordo (Tekken), Ling Xiaoyu (Tekken), Lothar (WoW), Ogram (WoW), Genji (Overwatch), D.va (Overwatch)… Ok! Ok! You get the point right? Sure, most of these costumes aren’t what you would call ‘creepy’.  But did you know that with a little bit of effort all of these costumes can be turned into a zombie version? Imagine zombie Mario or Luigi…

Not original enough? If you have the time you can zombify your favorite character or make your own costume completely from scratch. Maybe you can approach an awesome cosplayer to help you with that..? The possibilities are endless! ;).

Trick or treat! And you better have some awesome treats… Not just to give away to trick or treaters, but to keep for yourself as well. After all, Halloween is the perfect excuse for that! Nowadays you can buy all sorts of candy. Did you know that Nintendo has a huge assortiment of delicious game related candy?

And what about snacking on the ghosts from Pac-Man? Or enjoying some of these Resident Evil Peppermints made by Umbrella Corporation? How awesome would it be to receive these in your trick or treat bag? This is what we would call some awesome loot!

Most Game developers love to incorporate Halloween into their games through In-Game Halloween events. Obviously it would be impossible for us to mention them all. So here are just a few really cool examples to get you going.

Did we forgot an event worth mentioning? Post the event and the game in the comments below!

So you bought (or made) a costume, you have your Halloween candy, you bought some awesome games at an affordable price and you know about all your favourite in-game Halloween events. Now, what is next? Perhaps a Halloween Lan party? Time to combine all the above and make it a really, really, really awesome Halloween. More and more Halloween Lan-parties are being organised. Are there non available in your area? Maybe you should host one for you and your friends. Just make sure you invite us, too! Just kidding!

Way cool! Some very valid points! I appreciate you penning this write-up plus the rest of the website is really good.|